Because of his maniacal effort and stellar instincts, he not only held his own against bigger players but often excelled. Just watch how he stays with a bigger wing before forcing him into a terrible shot:

Those kinds of possessions were far from a rarity for Brown last year. He frequently had Draymond Green-esque sequences were he defended just about every player on the court and still managed to pass with flying colors. Look at how he helps off of a blow-by drive for a monster swat at the rim:

And although there was definite stagnation–bordering on regression–this year, Brown had interesting flashes offensively. Because of the wonky construction of Miami’s roster–they basically just went without a real point guard this year–Brown became lead de facto initiator of the offense, and performed adequately. 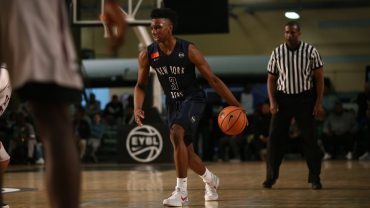