Trevor Booker had an up and down season for the Nets, to say the least. When he signed with Brooklyn last summer, he was presented with a big opportunity to showcase his talents.

Booker hails from Newberry, South Carolina, where basketball was a significant part of his childhood. His mother and brother both value the sport greatly, and his brother plays professionally overseas to this day. Booker was the Gatorade Player of the Year for South Carolina after posting astounding numbers his senior year in high school (21.9 points, 16.4 boards per contest).

He decided to stay local for college, ultimately choosing to attend Clemson University in South Carolina. Playing under Oliver Purnell for four years, he garnered a reputation for being one of the most hardworking players in college basketball. Despite putting up mediocre numbers for the Tigers, Booker still managed to be named to the All-ACC First Team and was among dozens of players who would go on to play professionally.

Despite being projected as a second-round pick leading up to the 2010 NBA Draft, the Minnesota Timberwolves saw enough to select Booker with the 23rd pick. He was subsequently dealt to the Washington Wizards, where he would ultimately spend four seasons.

Playing next to his draft classes’ number one pick, John Wall, Booker converted upon many easy buckets his rookie season. He shot over 53 percent from the field during his first two seasons in the league. As a result, Flip Saunders opted to give Booker increasing minutes over that time span as well.

Booker would spend two more seasons in Washington, followed by two seasons playing for a youthful Utah Jazz team. In the years leading up to his signing with the Nets, he established himself as an above average, energy, big man off the bench.

Booker excelled in this role for many years. However, he only started seven out of his last 158 games before inking a deal with the Nets. Perhaps this played a factor in his decision to go to a team that was beginning a rebuild. Of course, a near $5 million pay raise was likely a big pull factor to the Nets as well. Booker still left his long-term options open, as he agreed to a two-year contract with the Nets.

Booker had the most productive season of his career playing under Kenny Atkinson and the Nets’ coaching staff last season. He put up career-highs across the board and logged more minutes than during the 2015-16 season, despite participating in fewer games. Even though he failed to lock down the coveted starting power forward spot, he still managed to be effective while attempting to expand his game on both ends of the court.

On a team that was first in the NBA in defensive boards per contest, Booker was undeniably the most ferocious glass eater. With rebounding being his most valuable trait, Booker became a fantastic fit next to the dearly departed Brook Lopez.

Perhaps Booker’s biggest positive from last season was that he complimented Brooklyn’s biggest offensive weapon (Lopez) perfectly. He was sneakily everything Thaddeus Young had meant to the Nets, despite posting poorer numbers. 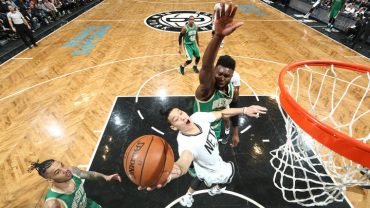