From day one, he understood his role as an off-ball weapon within the Nets up-tempo offense and thrived within it. His raw three-point percentage won’t blow anyone away, but his advanced numbers show that he was an elite catch-and-shoot three-point shooter (38.8% on 4.5 attempts per game). Moreover, a significant portion of his three’s (44%) came early in the shot clock. Both stats indicate a level of understanding and comfort in the system that was missing with the Raptors.

Not only was he comfortable taking shots early in the shot clock, but he began actively seeking them out, sprinting in transition to the corners and lurking on the wings waiting for the ball. Watch in the play below Carroll sprints to make the pass in order to set his feet on the wings before draining a three without hesitation: 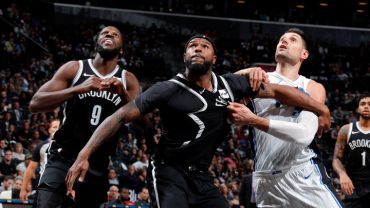