Due to the former inept front office the Brooklyn Nets spent the past several seasons watching their draft picks build another team’s assets. In spite of a barren draft pick cupboard it hasn’t stopped Sean Marks from finding other ways to acquire lottery level talent.

Specifically when the Nets traded for D’Angelo Russell (selected second in 2015 draft), it bestowed a rejuvenation rush to the roster and signaled the start of a new era in Brooklyn. Moreover, It was a new beginning for Russell, especially after the slander that was spread through the league, particularly during his tenure with the Lakers. Magic Johnson being the most recent, and certainly the most influential person to call out Russell, had some strong words for the young guard after trading him.

“D’Angelo is an excellent player. He has the talent to be an All-Star. We want to thank him for what he did for us. But what I wanted was a leader. I needed somebody also that can make the other players better and also [somebody] that players want to play with.”

Although a backhanded compliment, nonetheless the fact it was made by a Hall of Fame player, and arguably the best point guard ever resonates.  Russell has a chance to redeem himself with a young Nets squad that seems to have its screws tightened under the tutelage of head coach Kenny Atkinson.

This season, the Nets, along with the NBA in general, have suffered from losing their star players to injuries. Jeremy Lin was the first player to get bit by the unfortunate injury bug. D’Angelo Russell’s season was hit with the same unfortunate circumstance of life after an injury. The mental and physical strain of rehab is enough to drive a person insane. He missed 28 games after having arthroscopic knee surgery this past November.

The approach he takes to the comeback will be crucial for both the Nets and him in numerous ways. To that end, on January 8th, it was reported that Russell practiced with the Nets G-League team.

Russell was only able to play 12 games before the knee injury forced him out of the rotation. In that span, his three-point shooting was a mere 29 percent. Russell’s free throw numbers are sitting at a less than average 68 percent on 63 attempts. Granted, 12 games are a relatively small sample size, and Russell is only a third-year player therefore expect these numbers to change. When it comes to making suggestions on changes to the roster, winning is typically the deciding factor.

The on/off court numbers are not kind to Russell this season. The Nets went 5-7 with Russell in the lineup. The Nets are sitting on an 11-18 record since his injury. The Brooklyn Nets aren’t a good team, with or without D’Angelo Russell. Therefore, the win-loss record isn’t the greatest scale for this situation. Russell’s on/off numbers is the most striking statistic for the Nets this season.

Hopefully, these numbers are more trend than an actual representation of Russell’s impact on the team. Undoubtedly Russell is the most dynamic scorer on the roster. However, Spencer Dinwiddie’s coming out party as an NBA talent could force the front office into the position of sellers at the trade deadline. This doesn’t necessarily mean that Russell is on the trade market, although Dinwiddie’s emergence does afford Marks options.

Russell wasn’t brought to the organization to come off the bench. His arrival was one that felt like a star finding it’s galaxy; A mutual warm welcome. Which makes the idea of him starting with the second unit unusual. More importantly, if they do that to a player that has already had his reputation hit in a negative light, it might not make for smart strategy in the trade market. The safe bet is for him to return to the starting lineup, giving Russell the chance to show what he can do for the team. No reason to condemn him for a 12-game stretch. On the other hand, the idea of Dinwiddie and Russell sharing the court is intriguing.

It has been proposed before that Russell could play the two, even before Dinwiddie’s breakout season. This could work in stretches, seeing that Isaiah Whitehead is a decent enough backup point guard to trust in small windows of playing time. His usage rate also shows the trust Atkinson has in the backup guard. His usage rate (27.7) shot up nearly 10 percent from last season. Therefore, don’t be surprised if Atkinson rolls out the Russell-Dinwiddie lineup at some point in the season.

Regardless of the role D’Angelo Russell plays and how he factors into the Brooklyn Nets current and future plans the bottom line is his return will afford the Brooklyn Nets with something they’ve been in short supply of – viable options. 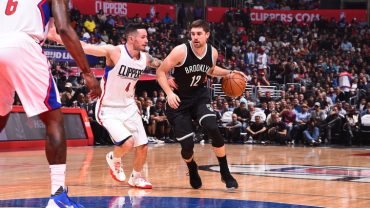