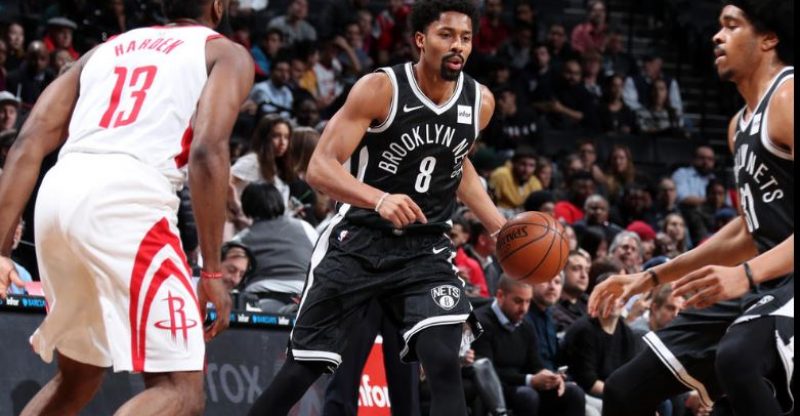 The Brooklyn Nets lost a tough 123-113 Barclays matchup with the Houston Rockets. Coach Atkinson curiously pulled the starters for the garbage time lineup early. Despite a 14 point deficit with over five minutes left in the game, Atkinson seemed to be waving the white flag to rest players for the Pistons game the following day.

However, the lineup of Isaiah Whitehead, new acquisition Rashad Vaughn, James Webb III, Nik Stauskas, and Jahlil Okafor actually closed the gap to six points by the 1:22 mark. Then, unfortunately, James Harden closed the game out to nix any miraculous comeback dreams.

The Defense Was Good…Until It Wasn’t

The Nets-Rockets matchup has the intrigue of Houston’s historic three point shooting volume clashing with Brooklyn’s league-best emphasis on three point shot denial. In the first half, Houston scored an impressive 63 points.

However, the Nets defense did look mostly admirable at denying spot-up looks on the perimeter. The Brooklyn defense also did solidly to delay Houston into later shot-clock opportunities. Chris Paul, James Harden, and, yes, Gerald Green just ended up being too good at scoring and playmaking to make it matter much.

In the second half, despite “only” giving up 58 points, the Brooklyn defensive process faltered. Open shooters became abundant for Houston and Capela outplayed Jarrett Allen. Caris LeVert could not fight through screens. Not an unusual occurrence against an explosive offense like Houston’s but still disappointing.

LeVert paid the ultimate price in the fast break as he ran directly into a Nene screen which sent him directly into the concussion protocol program.

Rashad Vaughn made his Nets debut much faster than Nik Stauskas and Jahlil Okafor had. The 6’5” wing did not stand out in the garbage time run at the end of the fourth but hopefully will in future games.

The former 17th overall pick will need to make his threes in the most direct ultimatum. If he shoots well enough to draw gravity, Vaughn may convince the Nets to stick another year.

However, Vaughn did not have his 2018-19 team option exercised for a good reason. Vaughn currently is a 31.2% career three point shooter and has not flashed any other skill. There is a reason why the protected second round pick had more value to Sean Marks.