Spencer Dinwiddie was the Brooklyn Nets gift that kept on giving. His improved play and clutch time success shone light on a franchise that’s wallowed in its own ineptitude. Dinwiddie was by far the Nets best player this season and is in serious consideration for Most Improved Player.

Spencer Dinwiddie was by far the best Brooklyn Nets player this season and it wasn’t close. He may not have the upside of D’Angelo Russell or athleticism of Rondae Hollis-Jefferson but he is intelligent, cool, calm and collected. At 25 years old, it is questionable just how much upside Dinwiddie possesses. One thing is for certain: Dinwiddie has certainly made a case for a large contractual raise.

Although Dinwiddie’s field goal percentage (38.7) and three point percentage (32.7) took a dive compared to 2016-17, he improved in every other area. In career high minutes (28.7), the former Detroit Piston posted career highs in points per game (10.7), assists (6.6), rebounds (3.2) and steals (0.9). Despite experiencing a career high in turnovers per game (1.9), his 4.1 turnover to assist ratio ranked him second in the entire league. His affinity for taking care of the ball is simply outstanding.

The most outstanding facet of his play came in the clutch this season. According to nbaminer.com, Dinwiddie ranked 12th in total points (99) when there is less than five minutes remaining and neither team ahead by more than five points. In these situations, he managed to shoot 36 percent (31-86) from the field but shot a terrible 18.4 percent from three (7-38). However, inside the last minute of play, Dinwiddie still manages to convert at a 34 percent pace (12-35) ahead of Indiana Pacers guard Victor Oladipo (6th), Washington Wizards guard Bradley Beal (8th) and Charlotte Hornets point Kemba Walker (11th). 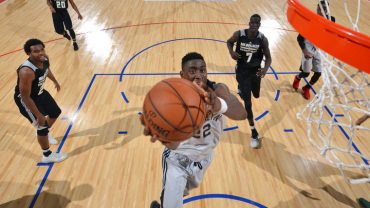