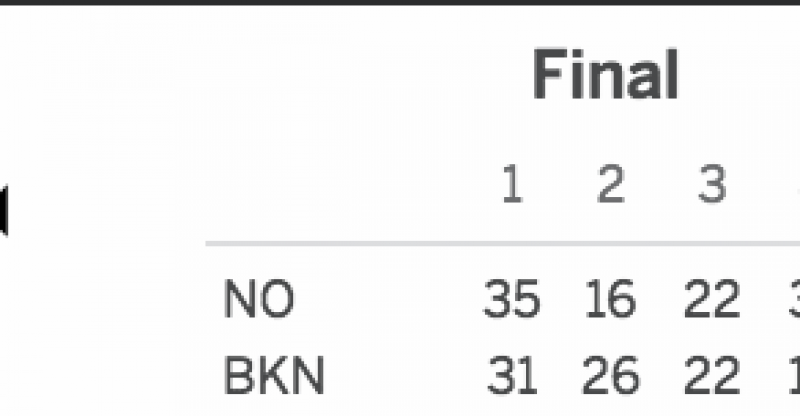 Welp folks, they did it again. Had the lead the entire game just to blow it in the fourth quarter, losing 104-95. What is worse, there is minimal improvement in areas that need improvement. Brooklyn just cannot catch a break or beat any team and they are now on an eight game losing streak. They blew both of the best opportunities to win in the past week with losses to the Sixers and now the Anthony Davis-less Pelicans.

With Anthony Davis sidelined for the night with a hip injury, you would expect Brooklyn to feed the ball down low and drive to the basket. That was the case for a little while as they did score 54 points in the paint compared to the Pelicans’ 44. The downfall of the night was not driving enough as seen by Brooklyn’s 9-42 three-point ratio.That is right, Brooklyn made nine shots on 42 attempts; a 21.4 percentage.

Another reason why the Pelicans were able to gain the lead and keep it at the end of the game was foul shots. Brooklyn allowed 25 free-throws to be attempted by the Pelicans. The Nets, meanwhile, going back to driving to the basket, only shot 11 free-throws; they made six of them.

With Anthony Davis out, New Orleans had to look elsewhere for scoring. Their scoring came from both Tyreke Evans, Terrence Jones, and Jrue Holiday, each of whom scored 20+ points. Evans had a season-high 29 points, Jones scored 23, and Holiday scored 21.

For Brooklyn, brook Lopez, as per usual, led the way with 20 points. Next up for Brooklyn was Sean Kipatrick with 18 points off of the bench. Joe Harris finally showed some promise as a starter as he got off to a hot start and ended up with 15 points.

More bad news from Brooklyn is from Isaiah Whitehead. Whitehead left the game in the third quarter with an injury and was unable to return. After he left, Brooklyn committed ten additional turnovers, seven of which came in the fourth quarter. He may not be the most natural of point guards, but his command of the floor was clearly missed down the stretch.

The one plus of this game was Donatas Motiejunas. Motiejunas went 0-7 from the field and only brought down three rebounds. Brooklyn almost had Motiejunas on their team and, judging strictly off of tonight, that is a good thing he is not.

Sean Kilpatrick and Joe Harris both get A’s on the night. Skilpatrick was second on the Nets ins coring with 18 points and he did it on 6-12 shooting, including 3-6 from downtown. Kilpatrick also had seven rebounds and a steal on the night. He is making the case to take over Harris’ starting spot.

Possibly knowing that Kilpatrick was on his heels for his starting role back, Harris had a good game tonight. Harris notched up 15 points on 6-10 shooting and went 2-6 from long range. Harris finally seemed like a capable starter for this team. If he is to remain in the starting lineup, he will need to play like this much more often.