Oklahoma State sophomore Jawun Evans runs a mile a minute. Evans may be the best pure point among the non-lottery crop. Jonathan Tjarks of The Ringer sang the praises of Evans in the High Upside podcast, projecting Evans’ ceiling higher than Yogi Ferrell’s.

Evans is more than just a great athlete. He uses his speed to find crevices in the pick and roll and off mismatches. Evans is particularly adept at scoring off the dribble, a skill that could be at a premium in today’s NBA. As a playmaker, Evans has solid vision, never forcing the issue. Defensively, Evans, like Ferrell, is undersized but annoying. He swiped a few steals using his 6’5” wingspan at OSU.

Being an undersized point guard in the NBA is rough. The 6’0” Evans may struggle against the NBA’s power point guards defensively. That could cap his ceiling as a reserve. Additionally, Evans isn’t particularly efficient around the basket. He shot well below average at the rim this past season. He can get to the rim, but has trouble finishing amongst the trees, lacking a bit in verticality.

Truthfully, Jawun Evans doesn’t fit the Nets’ guard ideals. His smaller stature hurts his NBA upside. But he does possess elite speed and solid shooting, so he could carve a role as a bench sparkplug. Evans is a playmaker, a role the Brooklyn Nets sorely need. Rather than looking to free agency, the Nets could look to the draft for a playmaker. 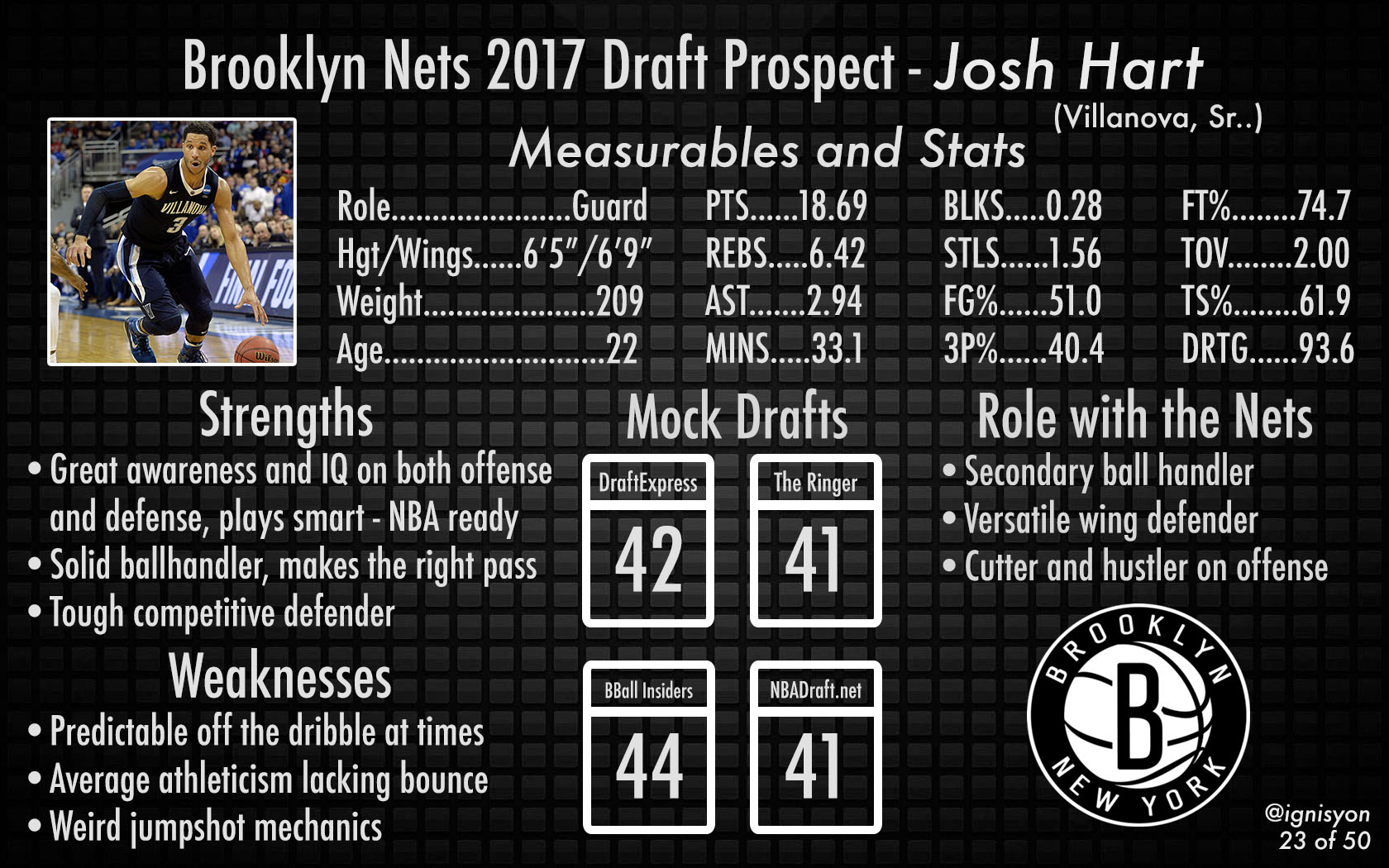 Villanova senior Josh Hart is a winner. He was part of the Wildcats’ 2016 NCAA Championship team, and a major player in their 129-17 record in his four seasons. Hart is a proven, solid commodity, exactly what teams want in a non-lotto pick. He excels as a ballhandler, with nice vision and IQ for a non-point guard. He shot efficiently everywhere, specifically as a spot up shooter and at the rim. Hart was the Big East Defensive Player of the Year this past season, solidifying his effort and reputation as a rock solid defender.

Hart has been slated as a fringe first rounder, and that could be due to his predictability as a four-year player. While he shot effectively as a Wildcat, scouts have questioned his mechanics. Lots of NBA scouting resorts to projecting a player’s talents, rather than what a player is. Hart does struggle creating off the dribble, lacking in pure athleticism and length. His ceiling may rest as a solid reserve.

Last season, the Brooklyn Nets shocked many by selecting fourth-year player Caris LeVert early in the second round. Choosing Hart could be in a similar vein as the LeVert selection, another productive, winning player that has seemingly gotten lost amidst the thresh of youngsters. He was even brought in early on for a workout in the Nets’ draft process. Hart is a winner, and could be a solid contributor in the NBA immediately. 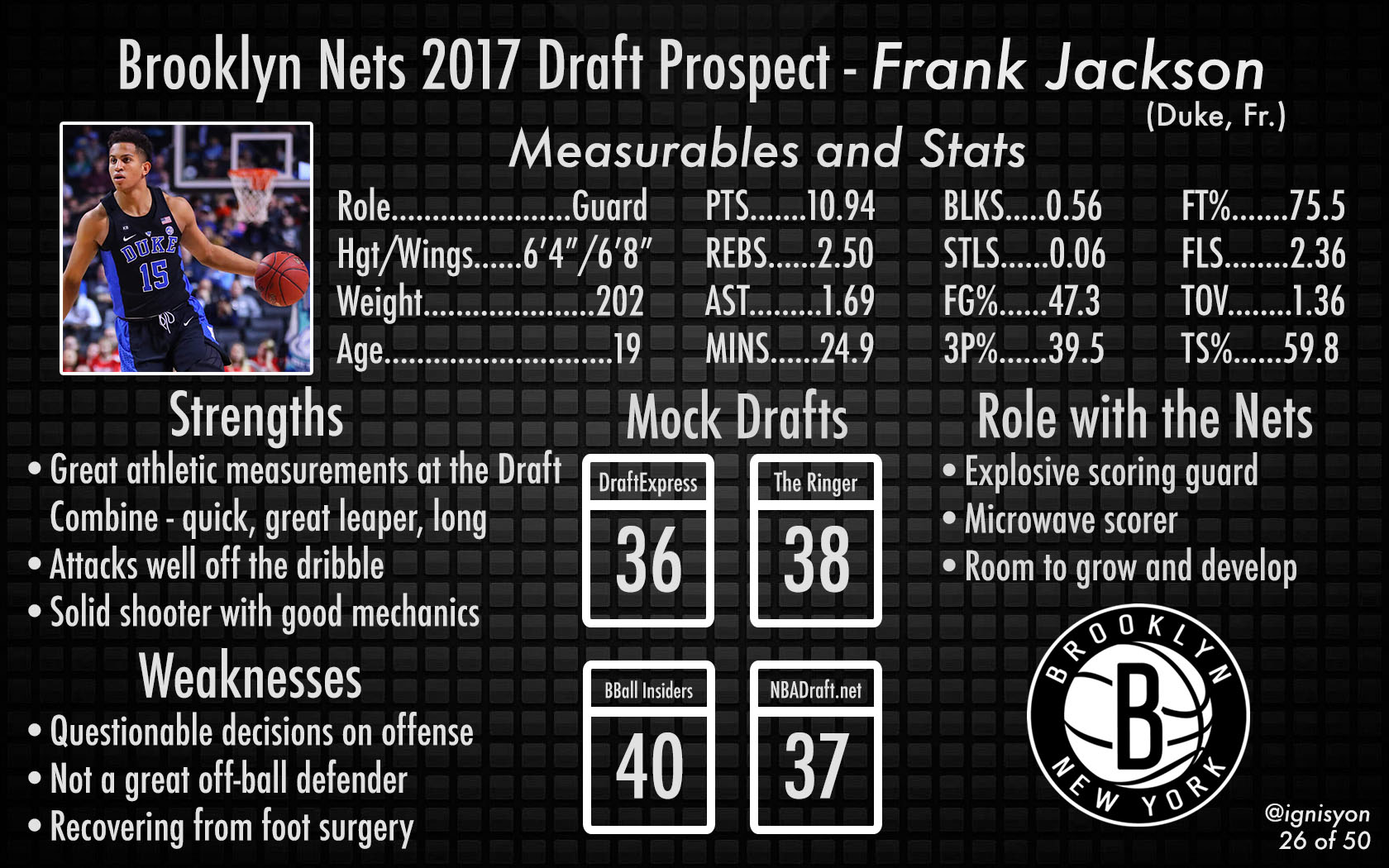 A bit of a surprise draft entrant, Frank Jackson is an intriguing late first/early second round prospect. He played behind two great collegiate players in Grayson Allen and Luke Kennard, yet still showed enough promise to enter the NBA draft. Jackson is a scorer’s scorer with microwave sixth man potential. He projects as a combo guard in the NBA, possessing super impressive speed, and a nice 6’8” wingspan with a 6’4” frame. He finishes well at the rim, finding solid angles off the glass. He was an athletic scorer at Duke, exploding to the rim at times or using a nice jumper pulling or spotting up.